Goodbye My Princess is based on the popular tragic romantic novel Eastern Palace authored by Fei Wo Si Chun (also created Sealed with a Kiss and Too Late to Say I Love You). There has been talks about adapting the Eastern Palace novel into a TV production for years but the execution never proceeded until last summer. Plenty of fan-made videos are available on the Chinese video platform bilibili using contents from Liu Shi Shi and Hu Ge's past costume dramas. Many many years has passed. Liu Shi Shi and Hu Ge have moved on to play more matured roles and the two major roles landed on two relatively unknown actors, Chen Xingxu and Peng Xiaoran. Some may be familiar with Chen Xingxu from his performance as Yang Kang in the 2017 version of the Legend of the Condor Heroes. Even though I never read the novel because I couldn't stand to go through another tragic heartache, I heard this novel is perhaps one of Fei Wo Si Chun's best works. The tragic love story is between th
Read more

Release of The Story of Ming Lan Character Photos

The Story of Ming Lan has been quietly filming for five months now. This drama is projected to have 78 episodes and a plethora of characters. I'm not too excited about Zhao Liying and William Feng pairing as the main leading couple as they don't suit the images I have of the original characters in the novel. I'm hoping to be proven wrong when I watch the drama. Zhao Liying plays the 6th child and youngest daughter of the politically rising Sheng family. The Sheng family dynamics will be interesting to watch as the drama will follow each of the sister's marriages. William Feng as Gu Ting Ye - Husband to Sheng Minglan Zhu Yilong as Qi Heng  Shi Shi as Sheng Molan - 4th (child) daughter of the Sheng family Zhang Jianing as Sheng Rulan - 5th (child) daughter of Sheng Family Wang Herun as Sheng Hualan - Eldest (child)  daughter of the Sheng Family Liu Jun as Sheng Hong - Patriarch of the Sheng family and father to six children born by di
Read more

Costumes of Xiao Pingjing in Nirvina in Fire 2: Wind Blows in Changlin (Part 2) 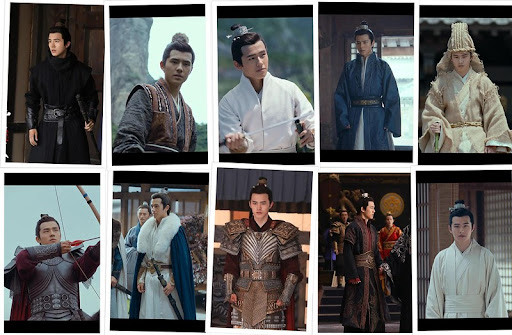 Episode 27 marks a big turning point for the character development of Xiao Pingjing. His clothing and hairstyle underwent a similar transformation. The style of his outfits became more ornate and structured to match his varius status changes. Xiao Pingjing went simply from the second young master of the Prince Changlin Manor to General Huai Hua, and then Prince Changlin after inheriting the official title from his father. If you missed the first half of his costume styling, you can check them out in this POST . He is no longer the optimistic, carefree, and unfiltered young lad we see at the start of the drama. The side bangs and ponytail we often see in the earlier episodes disappeared to mark the end of his unruly days. Overnight, Xiao Pingjing is forced to grow up and take on the responsibilities that his older brother left behind. Outfit #16 - First Appearance in Episode 27 @Ganzhou Province Camp - Suit of armor in mourning for his brother's death. Outfit
Read more

Deleted Scenes from Nirvana in Fire 2

I heard from unofficial sources that the Daylight Entertainment, specifically Director Kong Sheng, was fuming mad at iQiyi, the web-streaming network that invested in Nirvana in Fire 2, for haphazardly re-editing the later episodes. Many Chinese netizens blamed the production company for the lack of good editing in later episodes, especially Episode 41 and 42.  A member of the Nirvana in Fire 2 production team privately revealed in a chat group for fans that iQiyi completely re-edited what the two directors had originally cut for the drama. Director Kong Sheng's daughter also revealed on Sina weibo that Daylight Entertainment had originally cut 68 episodes but iQiyi trimmed it down to 50 episodes. And supposedly a 68-episode version will be released for oversea broadcast in Japan and Korea. I checked out the first four episodes currently released in South Korea and confirmed that each episode is approximately 45 minutes, which is the same length as the Chinese episodes. If what
Read more
More posts
Powered by Disqus